Early today, the twitter account for both the Comptiq and Comp Ace magazines announced the new serialization of a new Type-Moon manga to be included in the Comp Ace February issue, to be available from tomorrow (26th) onwards . Its name will be: “Melty Blood  Back Alley Alliance – Nightmare”. The manga will be drawn by Kirishima Takeru (MB, MB Act 2, MB X, Hana no Miyako!) and the script will be written by ACPI with supervision from Nasu. First chapter will be 48 pages long, with 3  colored pages.

In the picture we can see a cameo of Olga Marie from Fate/Grand Order hiding in an alley.  We can also see textlines like “For anything that helps to avert  destruction” and “It’s decided. Everything is for the sake of mankind—”

Hana no Miyako (花のみやこ) spin-off by Kirishima Takeru (Melty Blood manga) to start in the next issue of the Comp Ace. 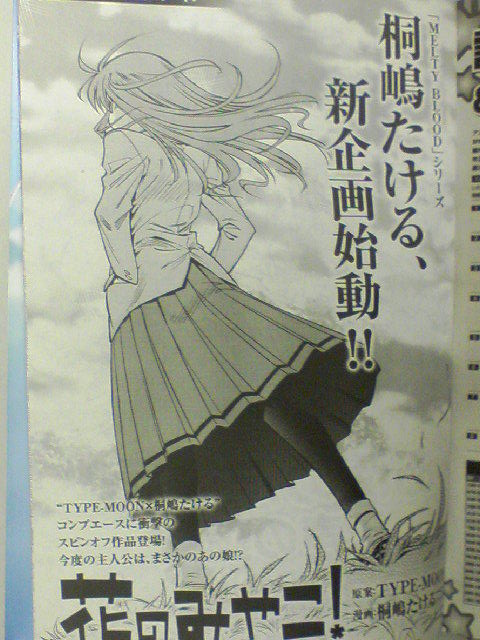